I apologize for the English, my (very) limited French classes are now many years distant.

I was digging through old pictures, and found some of a couple Lego exhibits that I encountered on two different family trips to Montreal. These exhibits were set up in the Olympic stadium, and were found entirely by chance - we were going to visit the stadium anyways, and there just happened to be some amazing Lego creations there.

I’ve scanned the photos, and uploaded an album to imgur. 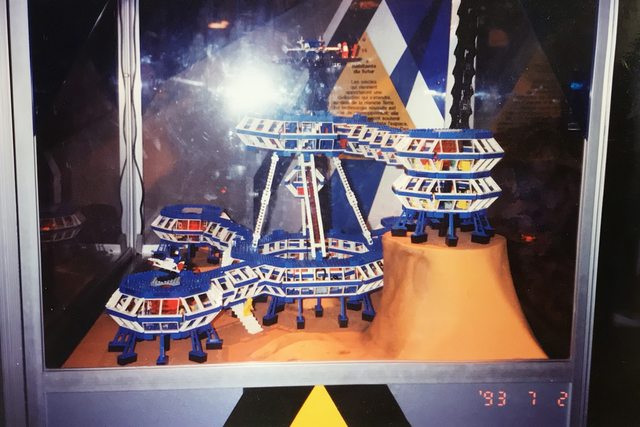 I figured that if there were a group out there who might know something about this display, it would be this one. I’ve been curious if it had been a traveling exhibit, and/or one made by local builders. In any event, as an early teen, I found it to be inspirational.

I remember it, I saw it when I was that age too. At the Eaton center I think. I still have the nice colour brochure they gave. I think it was a travelling exhibit.

I also have the visitor guide. It was indeed in the Eaton centre!

I’ve found some amazing things thanks to you remembering it was at the Eaton centre. There was an event there called the « Lego World Show » that had some amazing creations, and was a traveling exhibit. Through googling, I’ve been able to find some program scans from 1984 and 85, which have some incredible builds (looks like some scans also used to reside at brickset, but have sadly been taken down).

I’ve looked for scans, photos, and videos from the 1993 and 1994 Lego World Shows, but what little I’ve found hasn’t matched up with my pictures. It’s possible that the event I went to had a different name, or that the event’s exhibits would rotate as it traveled. I’ll keep looking!